With help from Hannah Arnold, Department of Atmospheric Physics, University of Oxford

The field of climate change research has been rapidly advancing. It is important to keep the general public up to date with the work that is going on, to show how the predictions of the effect of mankind on the climate are becoming increasingly sophisticated.

This article is designed to start off simple and become more technical as it goes along, so that there is something for everyone. Therefore at the point when you feel like falling over, well done for getting that far, and feel free to skip to the conclusion.

1. Is there a clear graph I can show my friends to demonstrate manmade climate change? 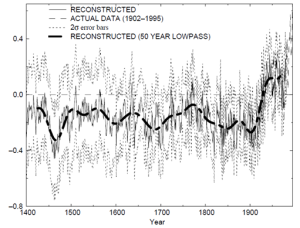 Not this one. Although this famous ‘hockey-stick’ graph, showing increase in temperature (some versions have CO2 as well) over the last few centuries is everywhere,  no one likes it any more. This is because it doesn’t show that temperature rises are human-induced and it doesn’t set the context of the changing temperature over thousands and millions of years, and so people like to argue about it. Don’t bother showing your sceptical friends this one.

I would recommend something like the following set of 2 graphs, which will help you get the get the point across clearly…

This is how you explain to people the story told by the set of graphs:

–          We have reasonable data for the global average temperature (plotted in red on all 3 graphs).

–          We use a model (see below) to predict what the temperature should be in two situations. First of all, with all the influences we can think of: natural ones like the influence of the sun, and volcanoes, and manmade ones such as fossil fuel use and aerosols. We predict that the temperature should rise overall – and look at the first graph: the way in which the temperature is predicted to quickly rise (grey line) fits very well to the observed (red) data.  Then we turn off the manmade influences,  keep the natural influences, and predict the temperature again (grey line in second graph). Modelled temperatures do not show the same rapid increase (incidentally the red rate of observed change is higher than that which would be associated with natural climate variability).   This is a way of showing the effect of manmade emissions on the global temperature.

The above was so last century. It’s all very well reconstructing what happened in the past, but how do we predict the future when we can’t test what we’ve done? We need to delve into the world of modelling…

A bit lower down on the cool scale, by ‘modelling’ I mean describing the earth’s systems – one example being the atmosphere –  in mathematical equations. The equations are based on physical laws, such as Newton’s laws of motion. The equations typically involve how a property, like momentum of a particular bit of the atmosphere, changes over space and time, so that you can then predict what the momentum will be at that point in space at a later point in time.

But modelling the atmosphere is, as I learned in my degree, flipping difficult. For a start, where do you put the boundaries? For example, there’s practically no point just describing the atmosphere by itself, as it is linked to the ocean in many ways – the ocean removes CO2 from the atmosphere; the atmosphere removes heat from the ocean; etc. But even an atmosphere-joined-to-ocean model isn’t good enough, as that ignores important interactions with the land mass and ecosystems… and also the atmosphere isn’t just one blob; you need to represent different bits of it in space (this is called ‘dicretisation’) since there is dynamic mixing of gases and differences in temperature throughout…

Very quickly, you start needing a supercomputer. Or, you can use clever solutions like http://www.climateprediction.net, who ask members of the public to let you run your model on their computer as if it is an extension to theirs. They have been getting results out for a few years now, thanks to the general public!

So what kind of modelling advances have been made recently? Some of the following is paraphrased from chapter 8 of the forthcoming 4th IPCC report, http://www.ipcc.ch/pdf/assessment-report/ar4/wg1/ar4-wg1-chapter8.pdf:

a)      More systems linked together

The goal is to advance from individual models of particular systems or groups of systems (e.g. ocean-atmosphere) to what’s called an ‘earth simulator’ – that is, containing as many systems as possible.

This image from the model shows the output from  some of the various systems included in the model: clouds, land surface temperatures, sea surface temperatures and sea ice. If you want a fascinating insight into the process of adding features to the model, and the ways they spot errors, here’s one: http://www.higem.nerc.ac.uk/science/status.php. I particularly like the bit that says: “Model crashed after 2 years with atmos noise around South Pole.” Damn South Pole. Why can’t we just put the South Pole in as a constant…

b)      Better inclusion of feedback

Some effects of global warming act to further speed up the warming. More famous examples include higher temperatures causing methane to be released from peat bogs and thus further warm the planet, and ‘surface albedo’ feedback – that is, melting ice changing the colour of the planet and causing more sunlight to be absorbed and emitted as infrared radiation rather than reflected as ultraviolet radiation, causing further warming.  Less famous examples include the carbon cycle – how living things react to the increase of CO2 in the atmosphere and increasing temperatures and how that might decrease their ability to take in CO2. Also, there is soil-moisture-precipitation feedback, which as the name suggests is to do with changes in the moisture content of soil affecting how much it rains.

All of the above are starting to be included in climate models, to further increase their prediction power.

The aim is to be able to put small-scale events such as cloud processes in the models so as to be able to see how they interact with larger events we can already model, like the advance and retreat of the major monsoon systems, the seasonal shifts of temperatures, storm tracks and rain belts.

The HiGem model I talked about a minute ago divides the ocean up into ‘squares’(ish) of 25 km length and width. This means that ‘small’ phenomena like clouds can be represented. In the same way, getting short-term processes (like the chemistry of the atmosphere) and long term ones (climate) to come together in the same model is a work in progress at the moment.

3) How do we know that climate models are correct?

The answer is that they’re almost definitely not correct; the question is more:

3) How do we represent uncertainty in climate models?

There are three main types of uncertainty in atmospheric modelling:

INITIAL CONDITIONS UNCERTAINTY: data from ground based or satellite observations is not collected at every single point in space, so we have to estimate what is going on in between. A small error in this can amplify as it propagates through the model – but this source of error is only important for weather forecasting, not climate modelling.

EXTERNAL FORCING UNCERTAINTY – ‘forcing’ is anything which changes the amount of radiation the atmosphere lets in or out. Most forcing types, such as the sun’s influence or regular changes in the earth’s orbit, we have got very good at predicting. So the main uncertainty is how much CO2 we’re going to emit in the next 50, 100 or more years. This error is very important in climate modelling, so the IPCC deals with it by modelling a range of scenarios involving different emissions.

MODEL UNCERTAINTY: this isn’t about the data you feed the model with, but the ways in which the equations of the model are just an approximation for how the physical processes in the world work. For example, since you can’t put every cloud in there, you have to put a parameter in for ‘clouds’, but it might not be right. Normally, you’d do a ‘sensitivity analysis’, which involves working out how much it matters if your ‘cloud’ parameter is a bit wrong.

The IPCC uses a method called multi-model comparison, which is where it sends some input files to about 30 approved institutions across the world, so that each can run it on their model. Each institution gets a different result, and in this way the IPCC can get a feel for the model uncertainty. The problem is, that’s not a rigorous mathematical way of treating uncertainty, and will underestimate it.

So the following work by Hannah Arnold of Oxford University is using a different approach to represent model uncertainty, called stochastic parameterisation (have you fallen over yet? If not, read on…). In each timestep, the first thing her models do is solve the Navier-Stokes equations on the global scale – no problem. The devil is in the detail – one then has to estimate what your ‘small scale’ processes (like clouds) are doing in each square of space. But we cannot precisely calculate what the clouds will be doing, so to represent the uncertainty in this estimate she (intelligently) includes random numbers in the calculation. Once the globe has been simulated once, this is repeated about 40 times with different random numbers, and comes out with a different answer every time. This gives a more rigorously mathematical way of seeing the total uncertainty of the forcing. You can read more about Hannah’s work here:  http://www2.physics.ox.ac.uk/contacts/people/arnold

4) What climate processes and effects are we confident of, and what are we less sure about?

Ocean processes should be mentioned here – there are some very sophisticated models out there. Still, it is difficult to model things like the jet stream which moves heat from American to Europe, because it is turbulent on a small scale.

Can we attribute particular extreme weather events to manmade climate change? People have been talking about this for a while, and the latest report to come out is here:

This isn’t about prediction, it’s about taking events which have already occurred and trying to calculate the probability that they were caused by man’s influence on the climate. How?

The answer, again, is modelling. Given that a particular extreme weather event or set of events was observed – such as recent increased drought in East Africa – a climate model can be run with and without human influence to see if it is that influence which makes a difference as to whether the increase in drought occurs. This is vastly simplifying the actual modelling processes, which give probabilistic results as opposed to the clear-cut ‘yes’ or ‘no’ answer my description seems to imply.

The above report does not claim to have absolutely succeeded in such ‘detection attribution’ as it is known, but instead to be ‘a step along the road’ towards the development of an attribution methodology.

In conclusion, the science is solid and the models are including more and more of the earth’s systems. Error and uncertainty are treated explicitly such that scientists know the level of confidence they should have in a particular model result.

So I think we can leave the climate scientists to it, being confident that they are doing a good job of describing the effect of our actions on the climate.

While they do so, here is a short list of how you can do your bit to reduce emissions – compiled from all my previous blog posts so far!

–          Get the defaults changed in your office as to when the lights/heating come on, what temperature the heating/cooling comes on at, etc.

–          Find out which bits of your house aren’t insulated yet and do it, perhaps under an incentive scheme like the Green Deal.